Some days you can never think of things to say, I have had months like that. I come up with brilliant ideas but they are gone in a flash when i come to write them down. I guess i have been experiencing writers block, or i have been too lazy to write anything.
Well what have i been up to?
I have had a trip to see the kids in cornwall. Took me 12 hours on the bus via London Victoria then onwards onto Penzance. I rode shotgun all the way in the front seat with loads of room to stretch out in front of me. I spent four days with the kids. They showed me the local sites and how they are getting on in life down there. Connor is into Gigg rowing, computers, warhammer , and Pacman. Victoria is enjoying being a fashion staement and guides. Thomas loves lego, playstation and sticking up for himself. They are doing very well without me (it hurts me say) and are all looking forward to new things each day. We went to flambards and roskillies ice cream factory which were a pleasure to visit with the kids. But the time soon came round to come home and a 12 hour trip home.
Work has been hectic with a manger leaving and having huge gaps in management cover ive been either at work or chilling out.
My wrist is feeling better after another rollerblading accident in which i chipped the bone. I now seem to have more movement back into it so may be able to start my fitness regime going. Cycling has been put out of the window due to my wrist. So it may all be good again soon.
Today I travelled into London and explored the depths of Sci-fi and comics. Something i have not done in a long while (apart from watching films and tv) and i really enjoyed myself . I got glimpses of sci-fi heroes as i wandered around. All the usual guests were there from star wars and a few from some really cool films which hold a special place in my heart. I somehow found myself in a memrabillia auction. Sitting watching people bidding on signed photos and other odds and ends, i suddenly felt the urge to bid. An Elizabeth Sladen autograph came up for auction and at ten pounds my hand shot up to bid. Ignored by the auctioneer the price rose higher and the item escaped my grasp. 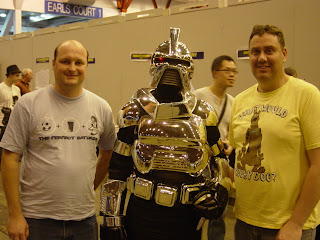 Then a few items again my arm shot up in excitement....again ignored I missed the item. I decided to cross my arms to prevent me doing it again, but I spied an item. A signed Peter Davison picture....my Doctor. We all have our Doctor, well those who watch it, the one that you watched all the time, the one you wanted to be. This was the Doctor i wanted to be when I was at school (and yes played at play time (I was young and shy)).  So, I was in with an opening bid of £5.00 expecting to be outbid straight away, I was ready with my second bid £15.00. Thinking I was going to be out bid I was ready with another bid. After all this was my Doctor everyone would want him....but no bid came, the room stayed silent and to my shock I had won. My Doctor would be mine, the helper brought my autograph over and I couldn't stop my hands shaking as I took the notes from my wallet. Grinning like a priced idiot I clutched my photo he was mine! But the bug had hit me. After a few more items sold they came out with a 2 photo offer Elizabeth Sladen and Nicolas Courtney both long standing Doctor Who assistants and both who unfortnately passed away this year. Both autographs had both gone for £25.00 each and I had been ignored on one. I won again at £25.00 for the pair and this was startling realisation that after paying I needed to get out the room before I bought some ewok slippers or R2D2's shoe laces. I practicly ran from the room back into the dealers room. After a brief wander round thinking i spent too much I discovered the 2 assistants photos for £45.00 each. So I felt like I won double and once again I was grinning like an Idiot. 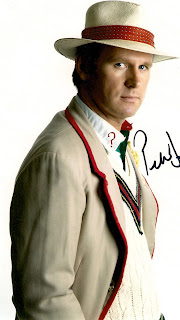 steve's time to get a life